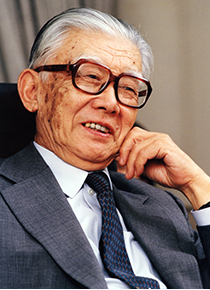 This is the message from Mr. Ibuka, Sony Group's founder, encouraging individuals with disabilities to work as hard as those without disabilities. In the background, there was a strong belief of Ibuka, as an engineer, who poured his soul into "education to make humanity" and "human development" while establishing Sony.

This Ibuka's philosophy has been carried out into the current Sony's various diversity, equity, and inclusion activities including employment of individuals with disabilities.

Since establishing Kibou Industry in 1982 and Sony Hikari in 2002, Sony Kibou/Hikari Corporation continues to foster a work environment that promotes employees' growth as individuals by providing ample opportunities for challenges.

＜To Be＞
Sony Kibou/Hikari, as a member of Sony Group, will continue to enrich the minds of all people we connect with by developing ourselves to evolve as a professional and reliable team respecting the value of diversity in individuals.

This is the "hope to be" phrase that all employees at Sony Kibou/Hikari put together. Each one of us gave a careful consideration and repeated discussions with each other what it would mean to work at Sony Kibou/Hikari and what our goals would be. The message shows our commitment to keep on providing a better performance and growing as a professional team with high credibility as we have done since its establishment. We believe that our continued challenges for new opportunities such as office environment management including cleaning and recycling, administrative support including textbook printing for HR training, business card printing, HR/Accounting documentation, and administration of nursery school application, data input and processing, digital archiving of video footage and paper media, have led us to expand our fields and to demonstrate our capabilities.

Sony's Purpose is “Fill the world with emotion, through the power of creativity and technology.” Sony Kibou/Hikari strives to get closer to people and to enrich and delight the minds of all people we transact with. Respecting the diversity in individuals, we will continue our challenge to provide a brighter future filled with smiles to Sony Group companies and to the community beyond.

Received the Gold Rating in the "PRIDE Index 2019", Evaluation of companies' efforts toward LGBTQ and others. (Oct.)

2020
Received the Gold Rating in the "PRIDE Index 2020", Evaluation of companies' efforts toward LGBTQ and others. (Nov.)

Started image annotations and production of braille business cards
2021
Received the Gold Rating in the "PRIDE Index 2021", Evaluation of companies' efforts toward LGBTQ and others. (Nov.)